The Cascade Orienteering Club is a non profit organization directed towards organizing Orienteering events in the state of Washington. Where Orienteering is basically a sport activity which involves finding your way from one point to another using a navigational map. They create navigational maps and host meets in the Washington state.
- Encourage people of all age groups to participate
- Increase indulgence in natural resources
- Educate people in land navigation through the use of maps
Process 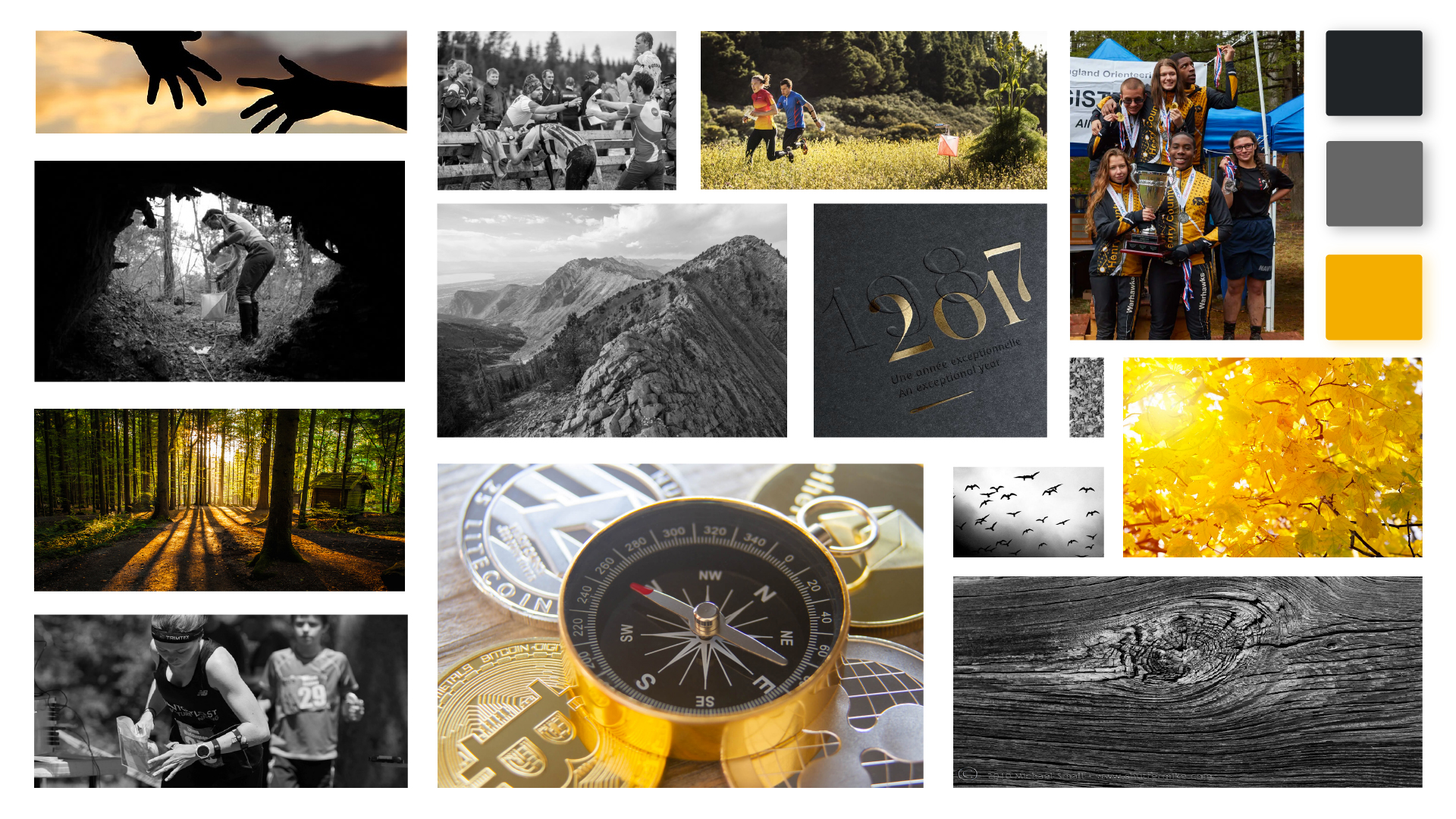 Cascade Orienteering Club’s stakeholders and the mission statement were two major factors which contributed to the content of the moodboard. This was one of the major milestones and inspirations throughout my journey. I tried incorporating various textures and dark colors to depict the hardships and incorporated spurts of light to depict sunshine, hope, and happiness which can be seen in my designs. The use of black and white adds to accessibility and simplifies the brands vision.
Grid System 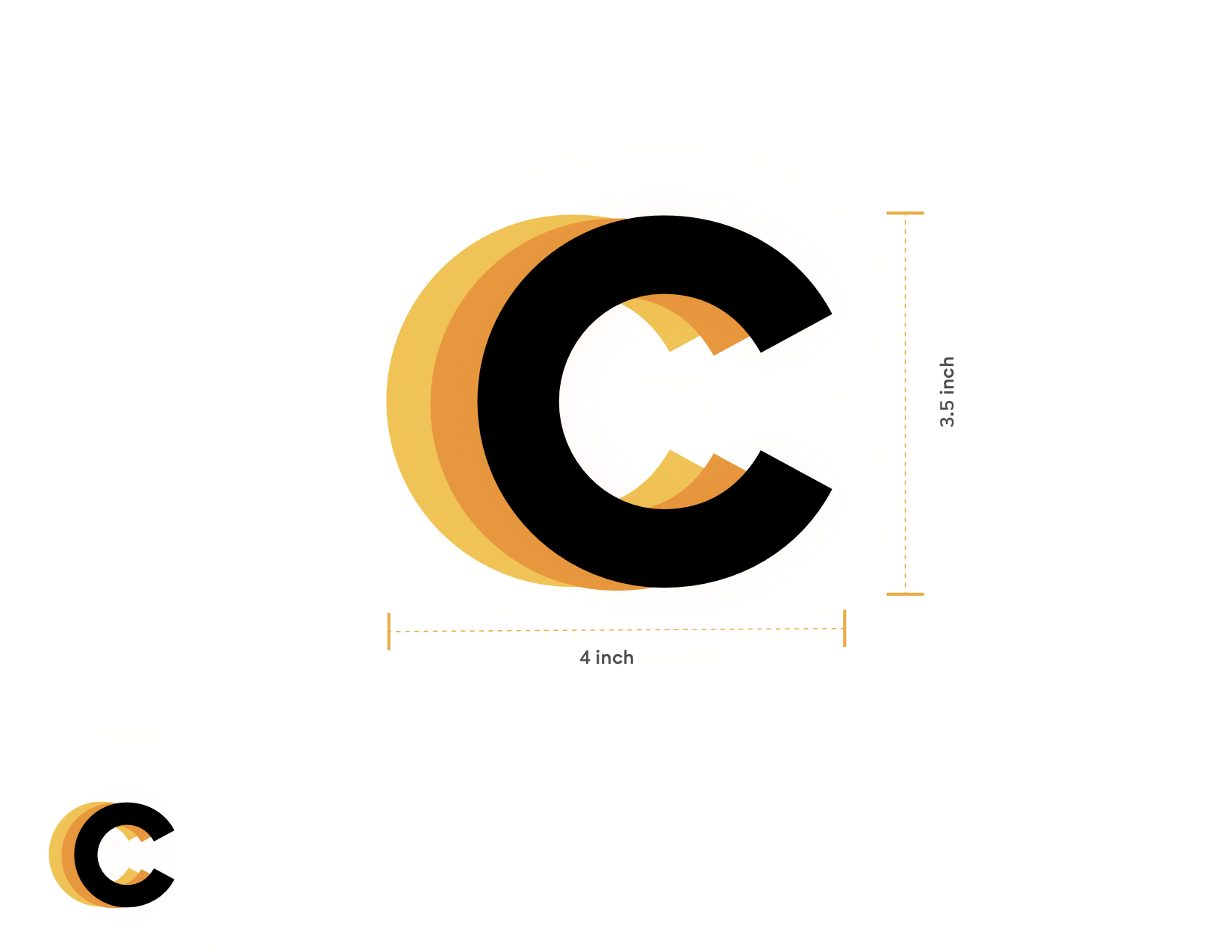 The Cascade Orienteering Club’s Logo is based on iconic logo design - using a combination of cascade and their initial as a sign of identification. The words that inspired the formation of the logo were simple, modern and accessible. The overlapping of the C signifies the cascade mountain range. The color yellow depicts sunshine, hope and spirit and at the same time the color black depicts power. The logo design is a perfect balance between positive and negative space and considers accessibility.The logo is distinguishable to communicate their identity and their purpose through the medium of colors.
Typography 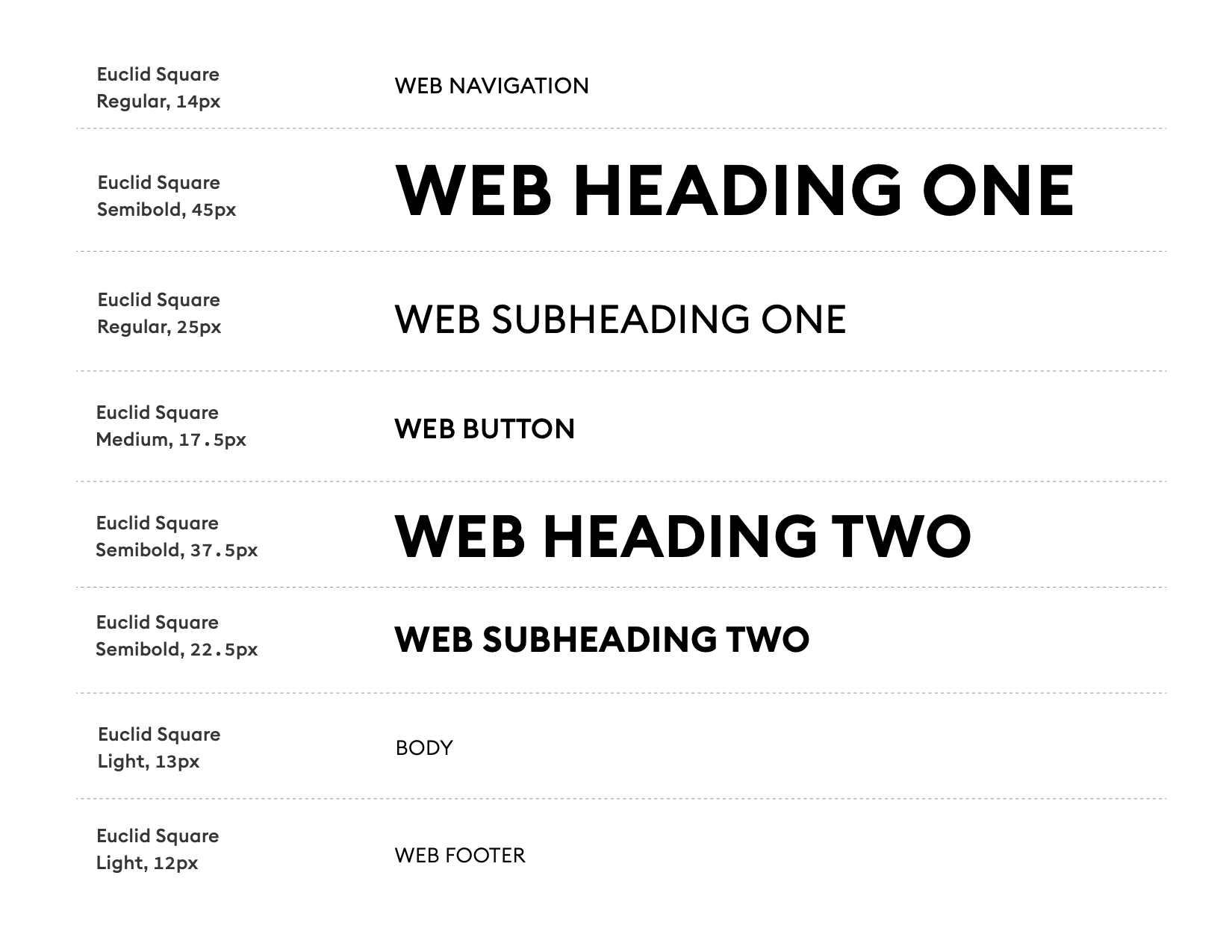 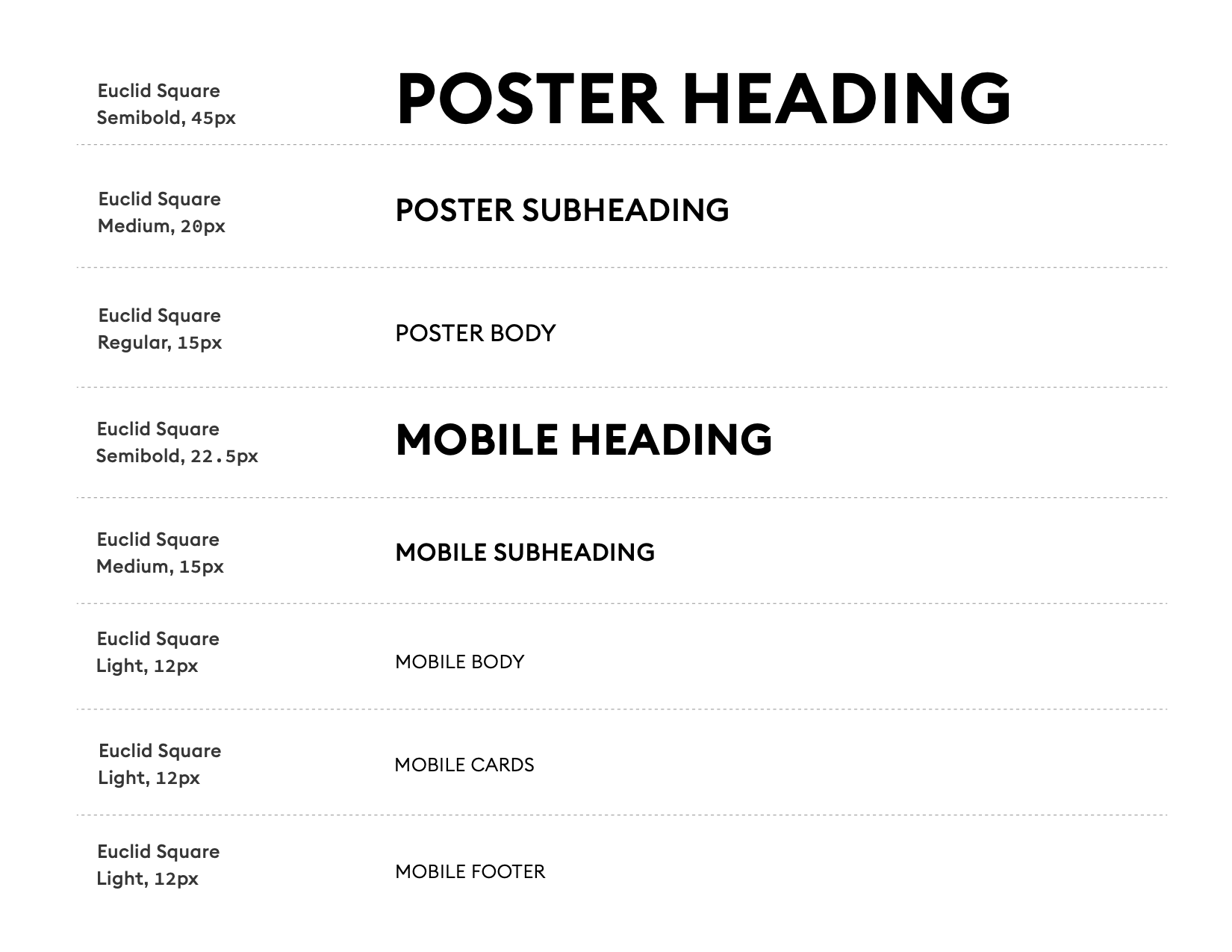 Euclid Square is a Geometric Typeface. The straightforward shapes in the typeface are associated with modernism and eternalness. The geometric shapes have a huge effect on text appearance, adding both sparkle and resoluteness. This font is used throughout the visual system since it gives a more professional and cleaner look. Since a single font face is used throughout, colors, scale and white spaces are used to demonstrate hierarchy.
Color Palette 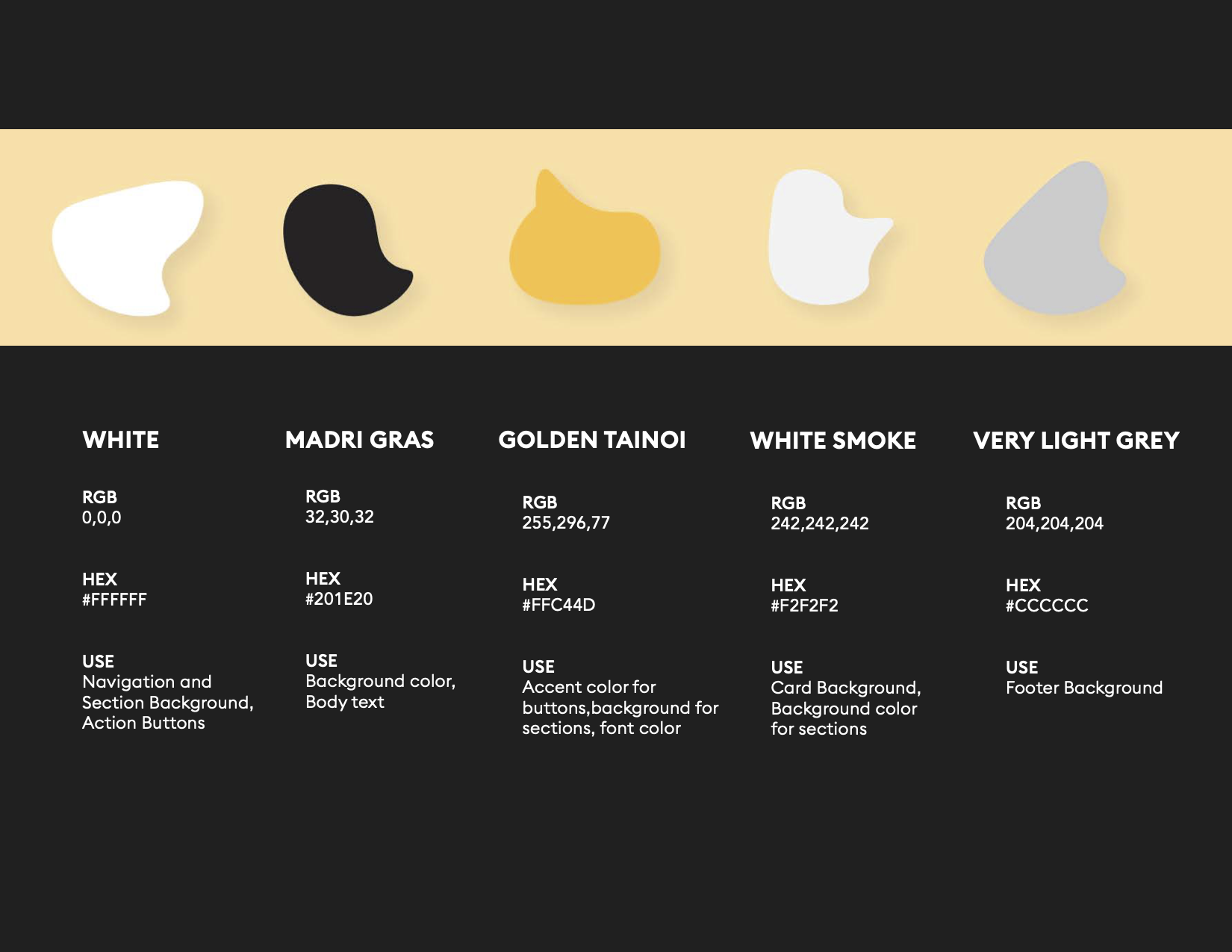 The color palette is highly inspired from the moodboard. The four main things that were a focus while choosing the color palette were a combination of colors depicting: inspiration, sunshine, happiness & spirit. The supporting colors to Golden Tanoi are black and shades of grey since the purpose was to highlight the dust and the dirt associated with orienteering. The color Golden Tanoi was used to evoke a sense of success and growth in the midst of the the darker color tones.
Imagery

The images on the website are gray scaled to maintain consistency with the color palette of the visual system and the moodboard. The images used are related to various moments during orienteering. They are added in to break the monotonicity of the text and increase engagement in the website. The use of images is to emphasize on the action that is depicted in the image for instance: running, using maps, participation. The contrast of the images is increased to give a impactful look.

‍ICONS - The icons on the website resemble the action they represent as closely as possible.Here icons have been used to display the mission of the Cascade Orienteering Club.
Final Design 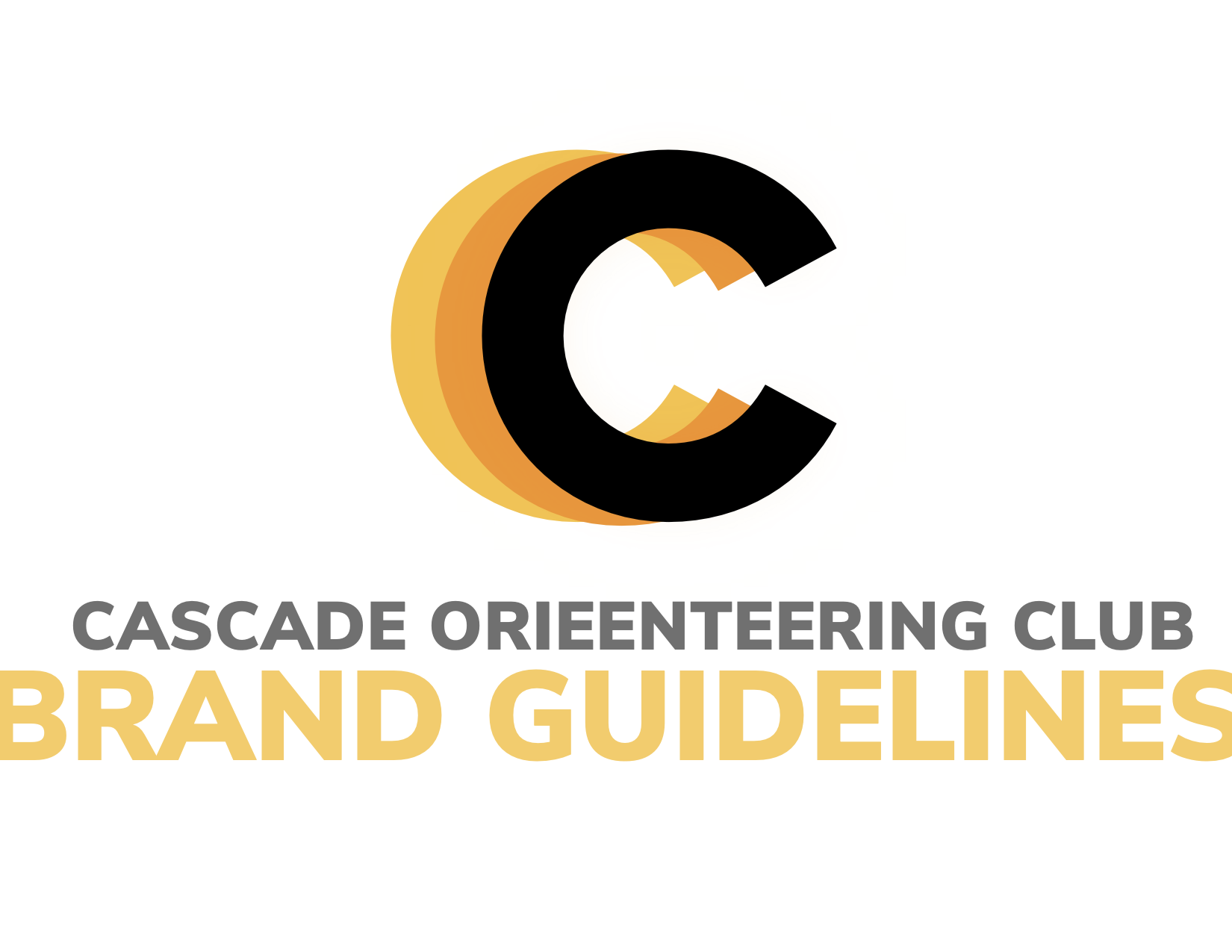 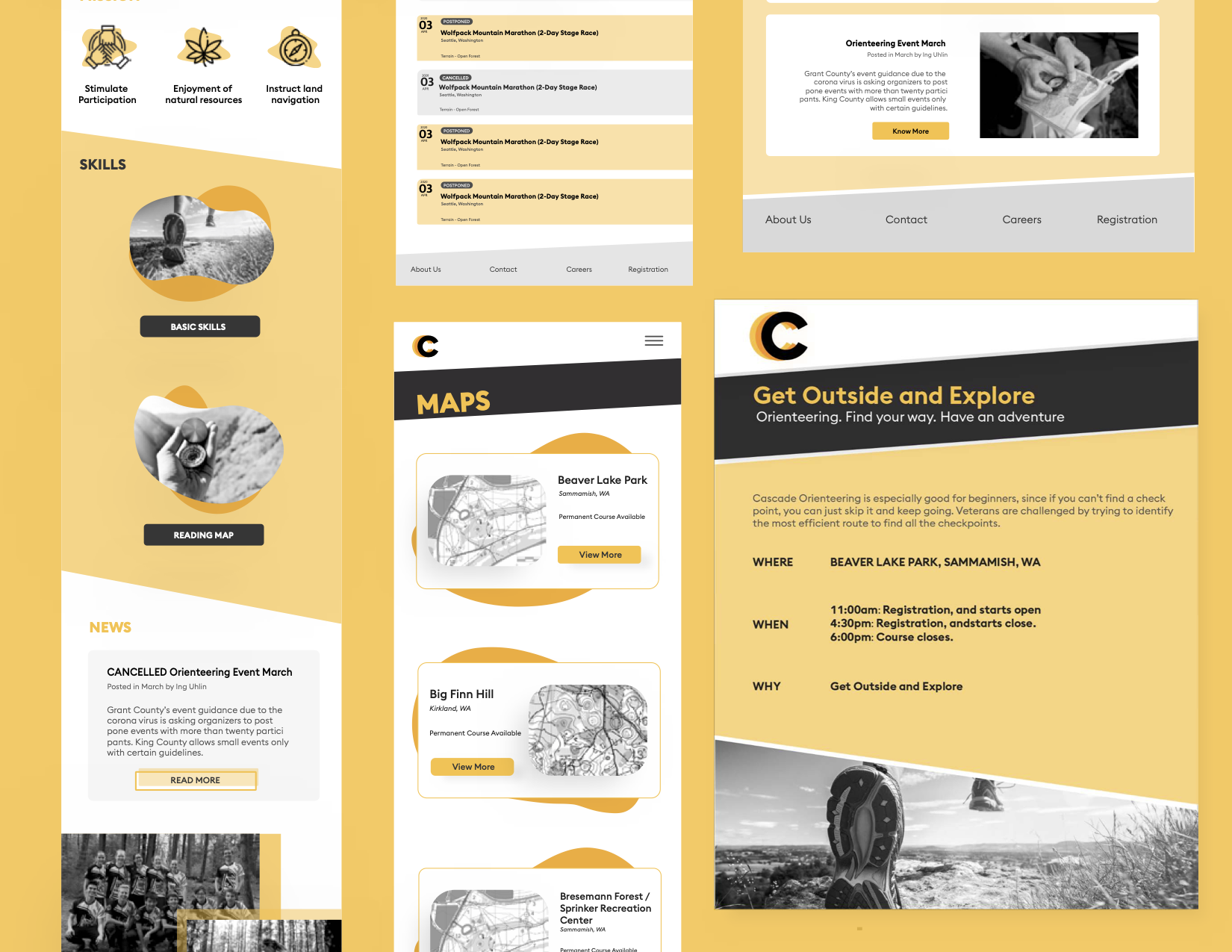 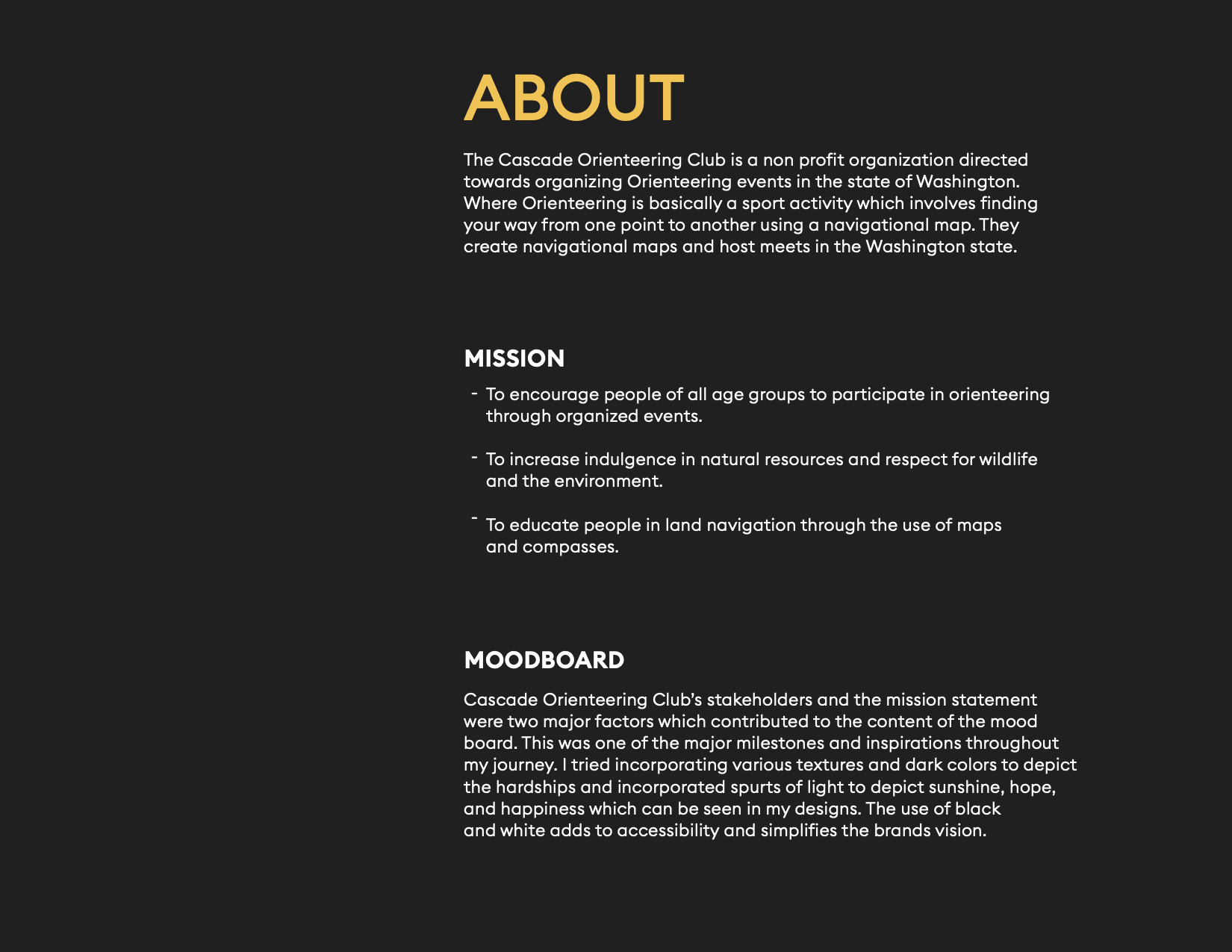 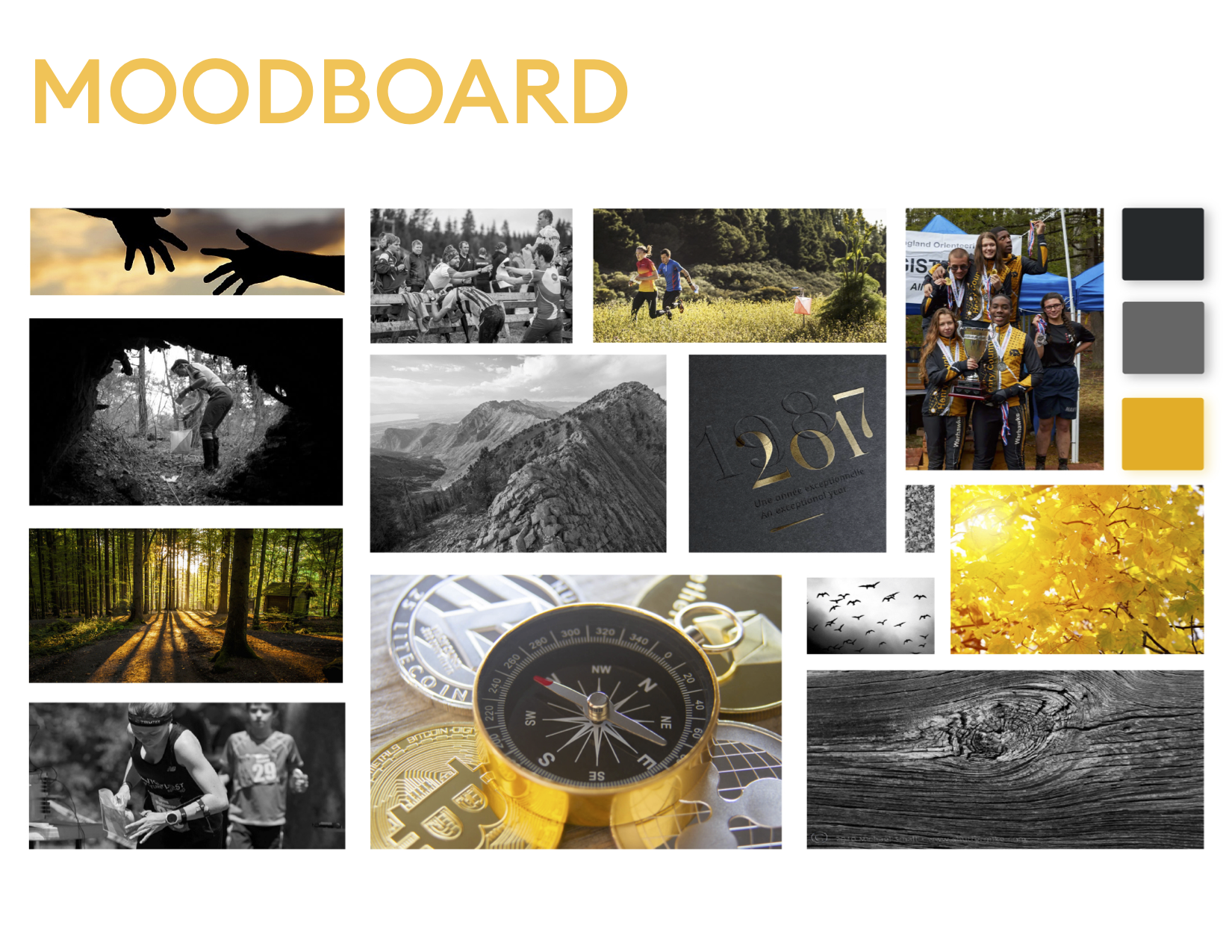 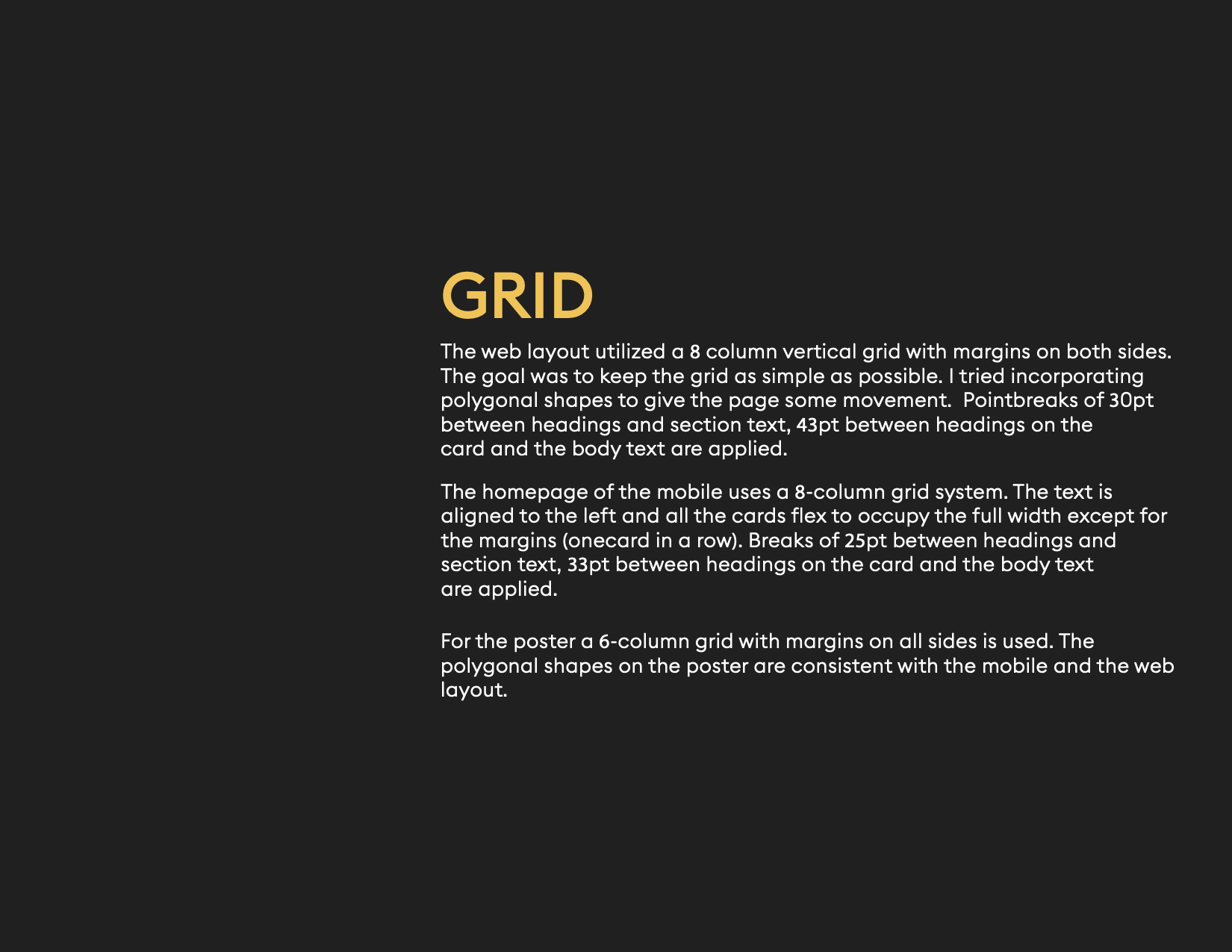 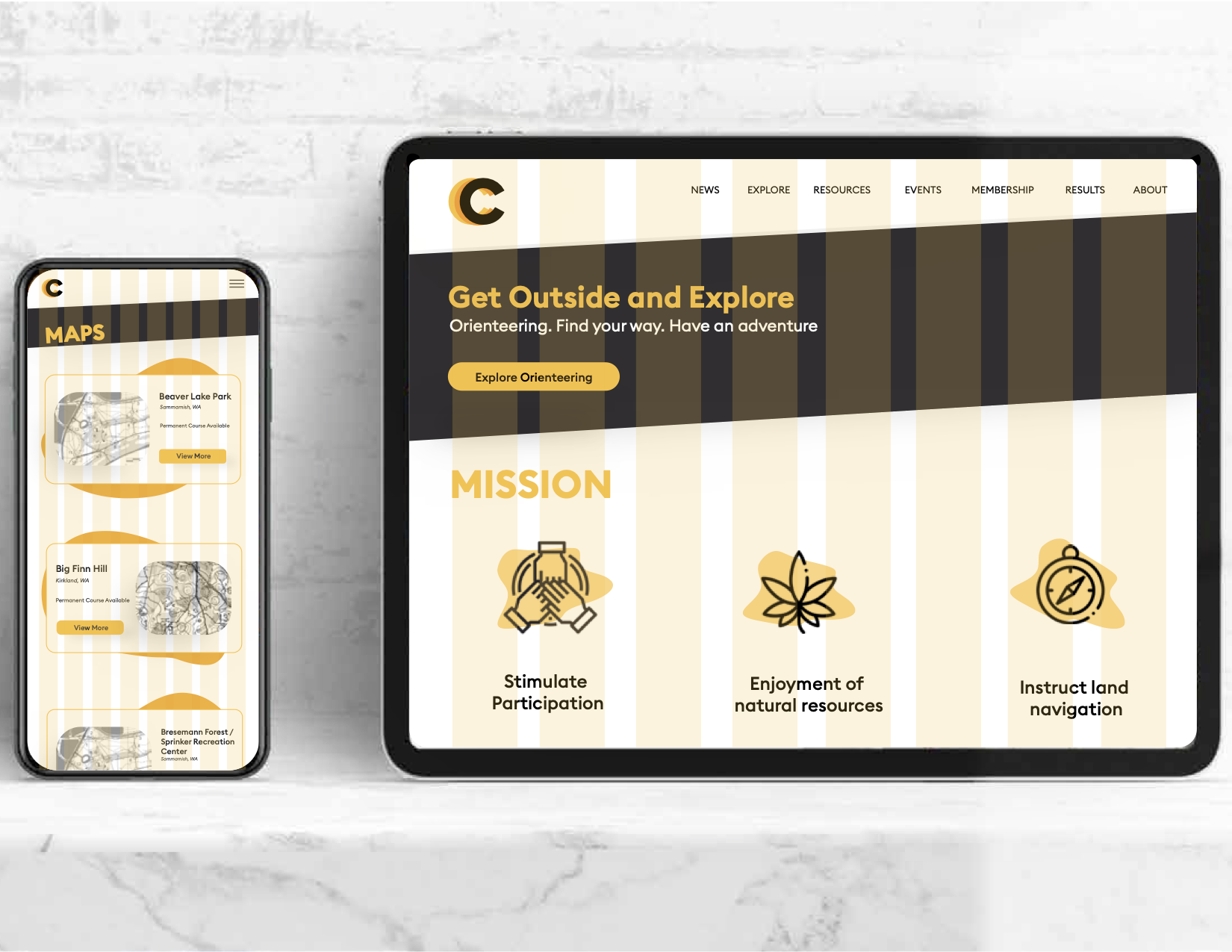 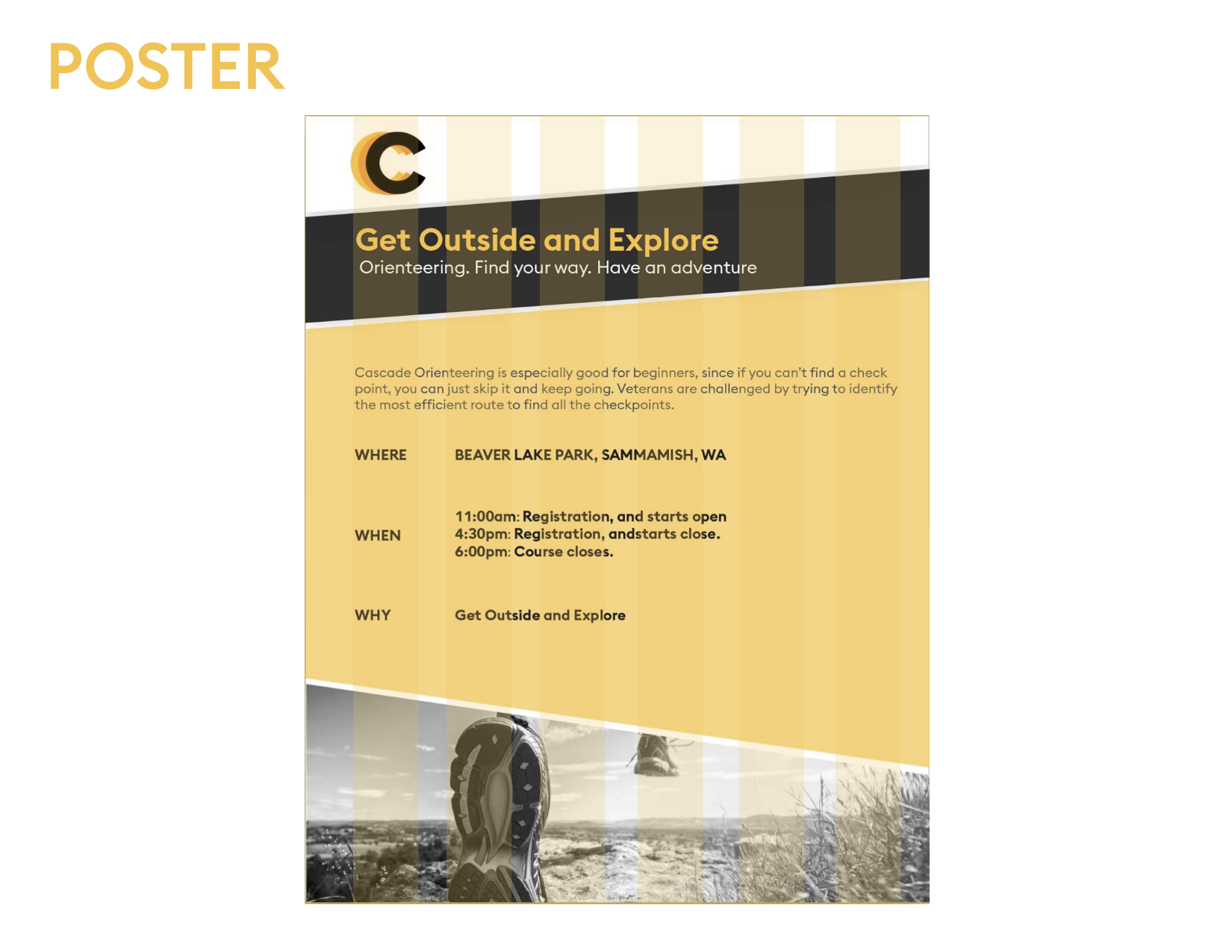 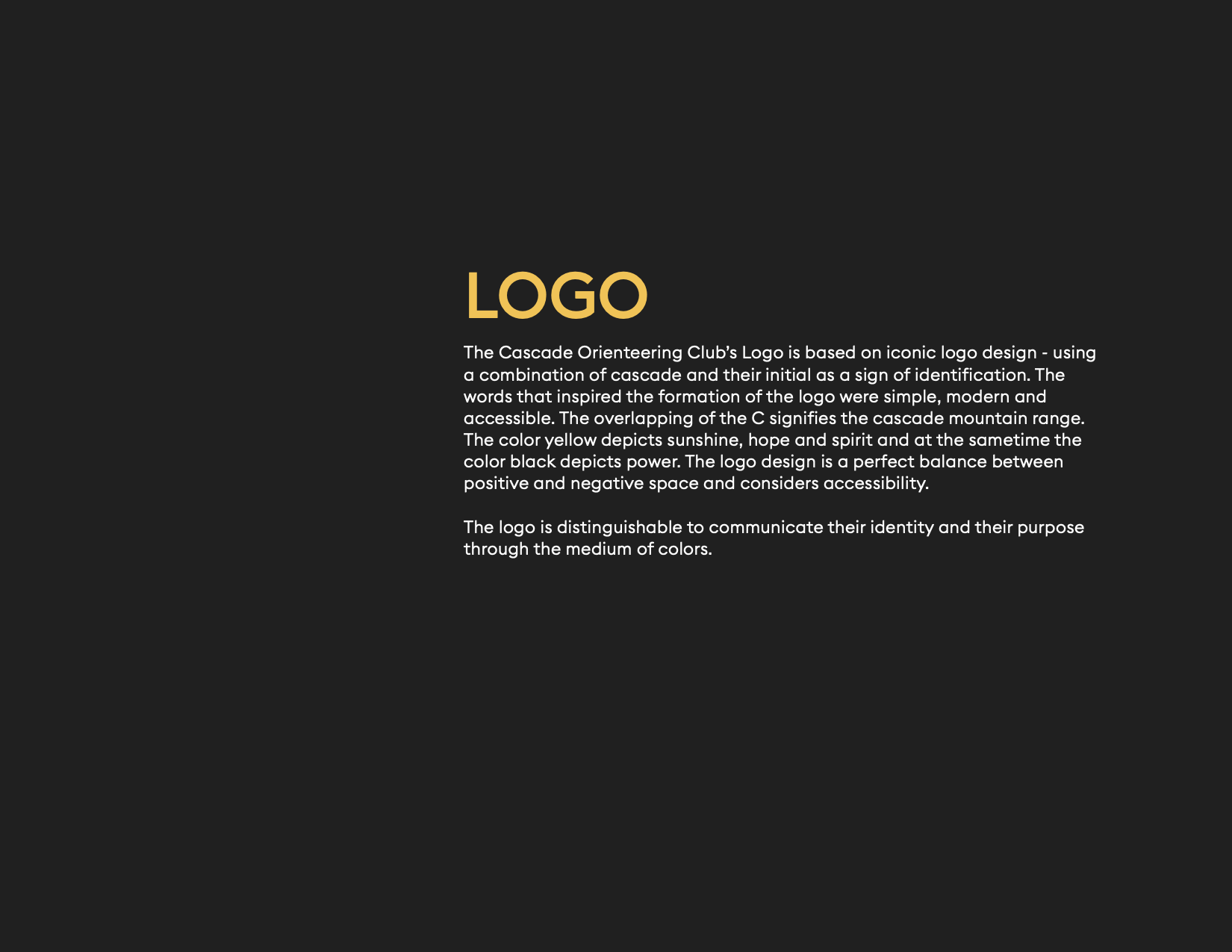 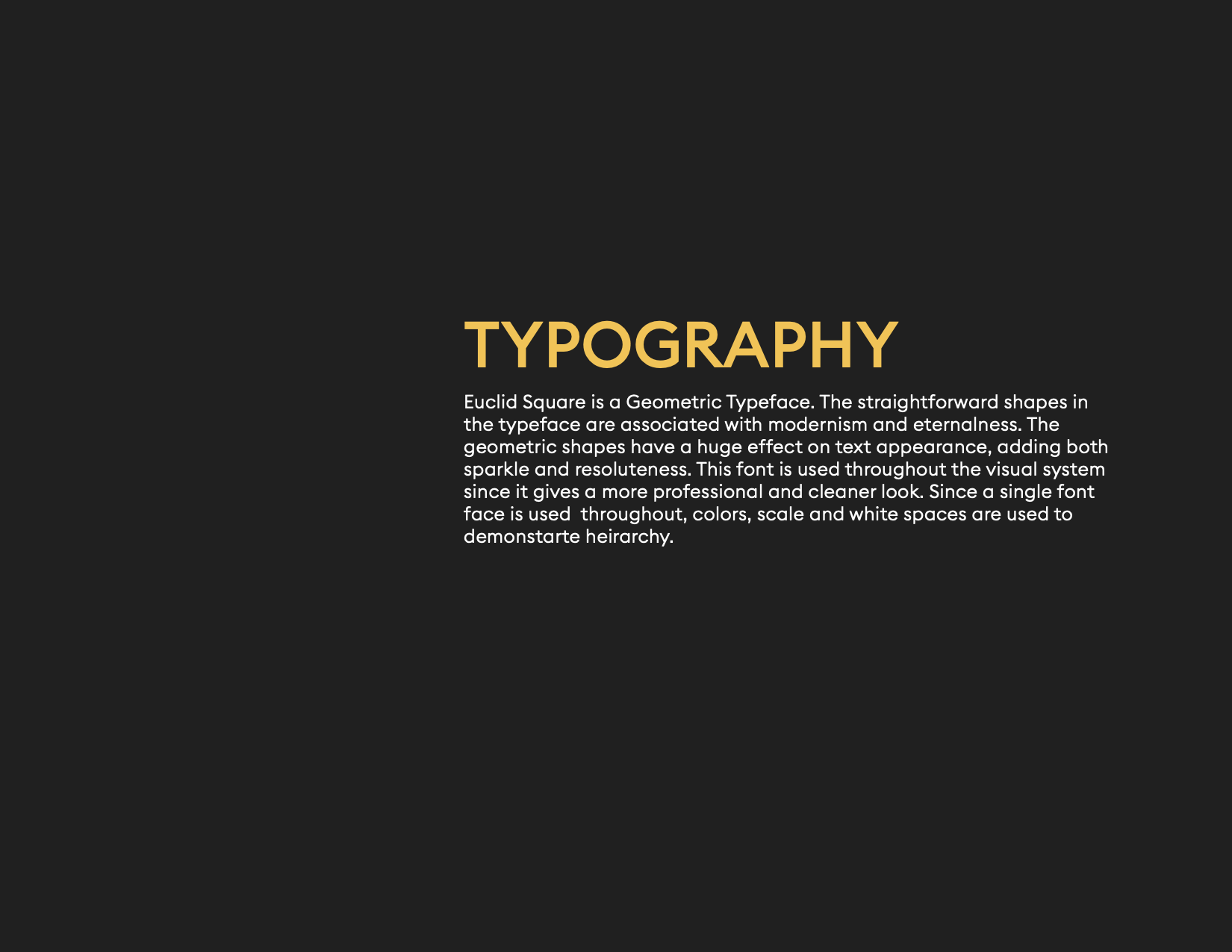 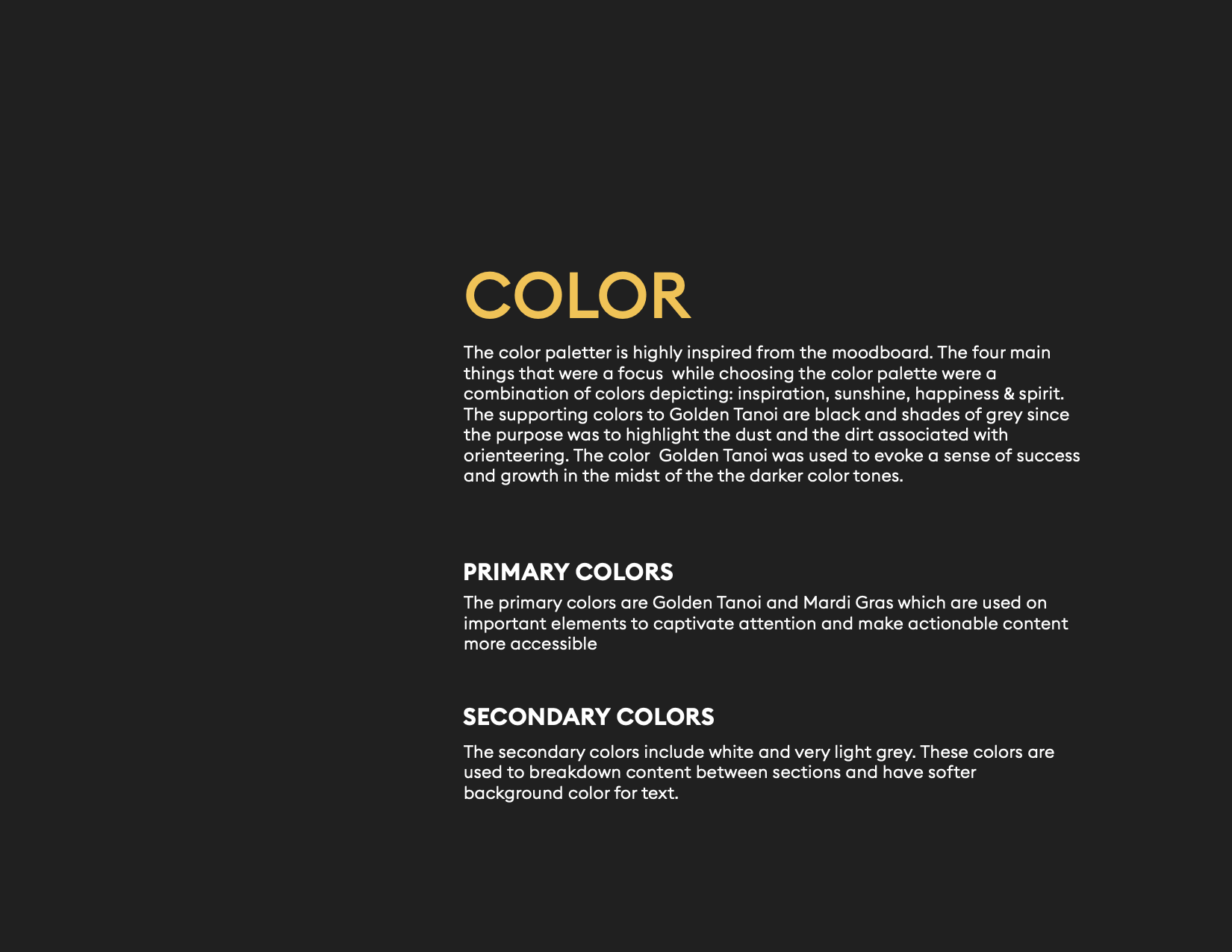 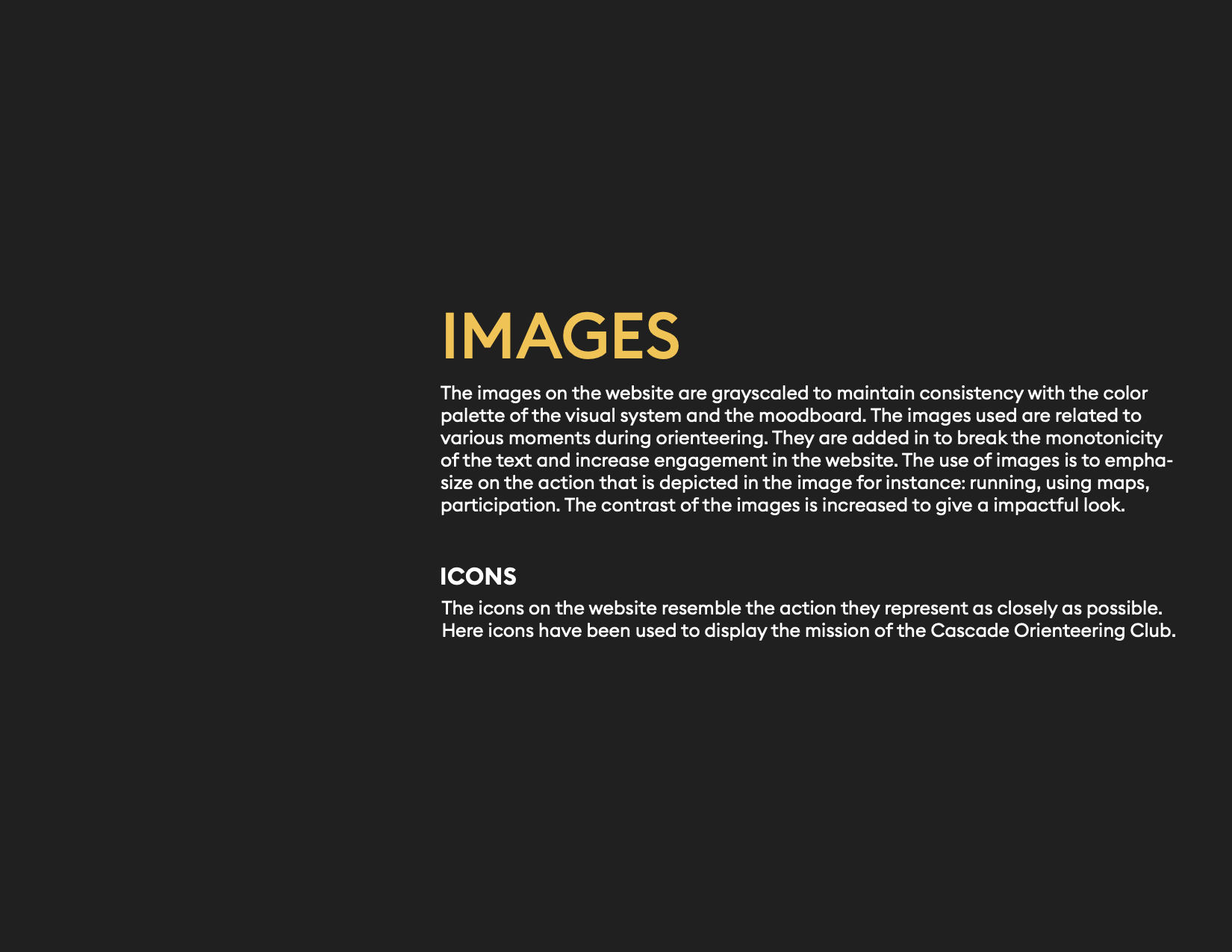 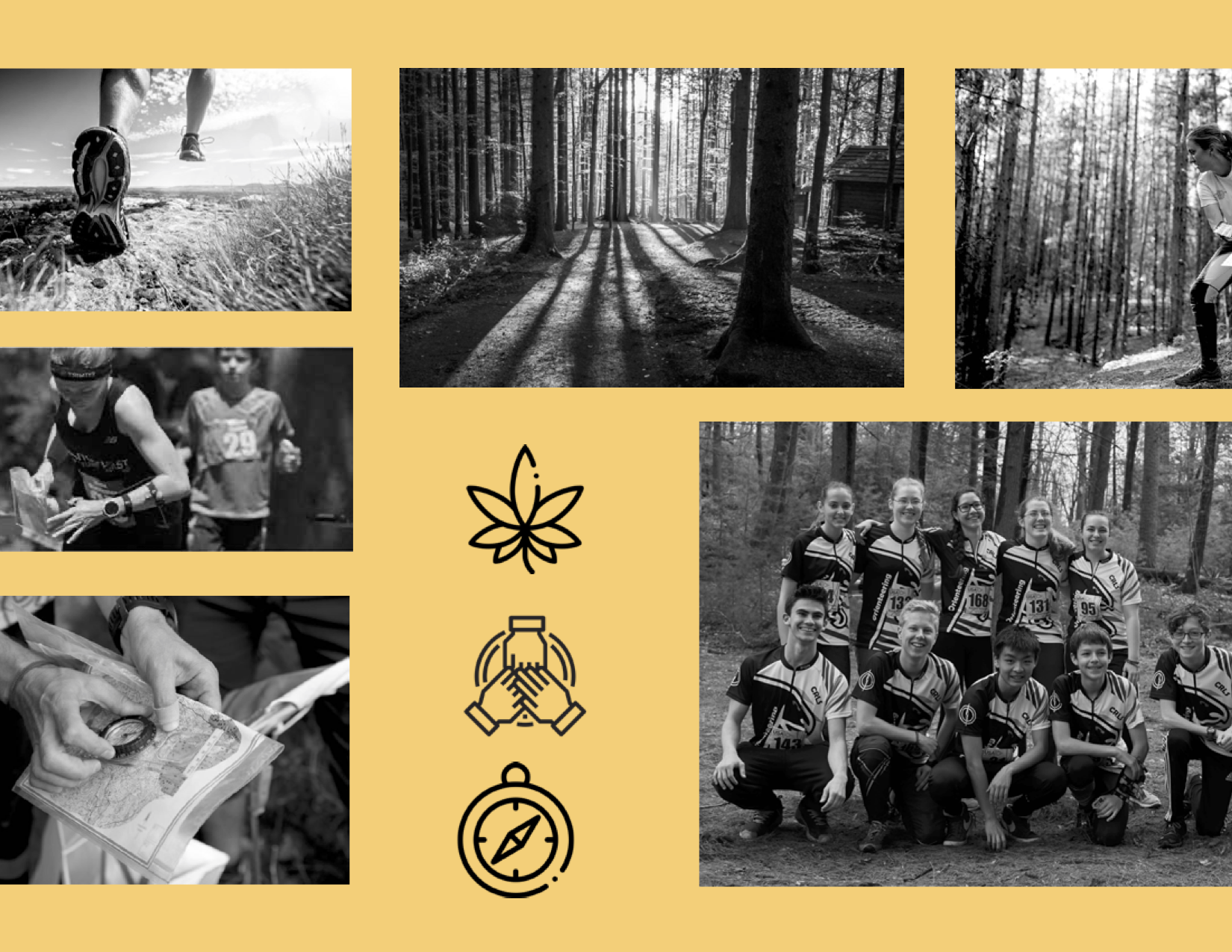 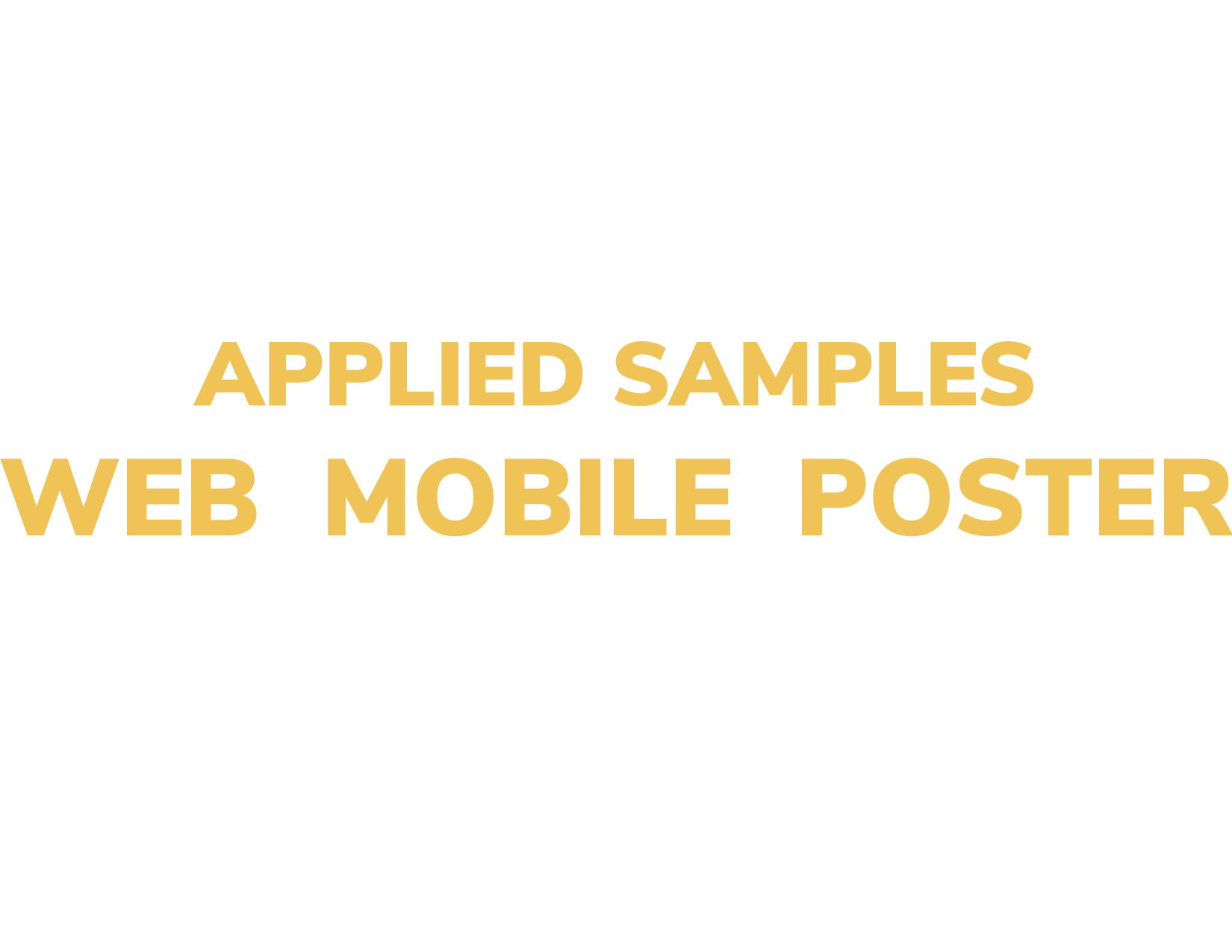 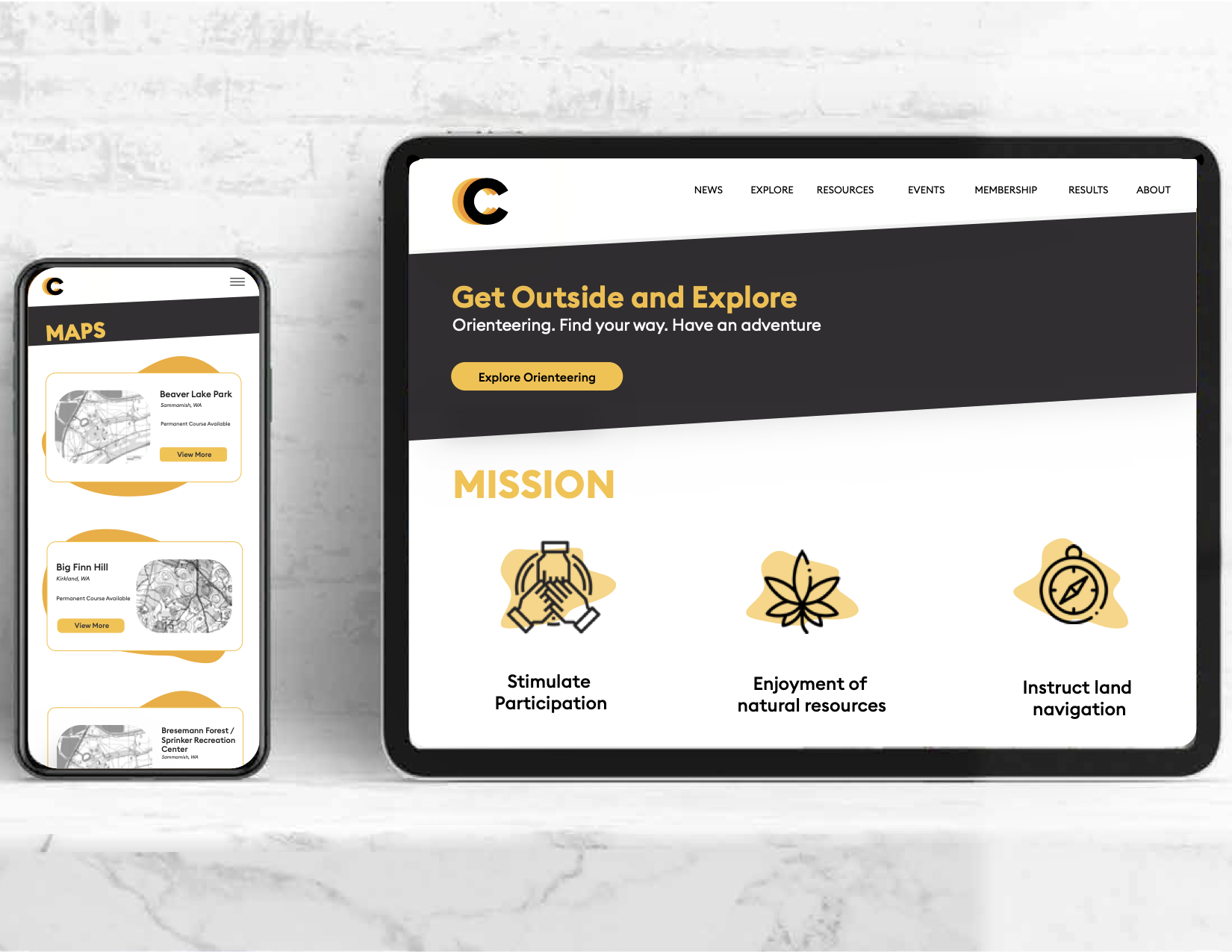 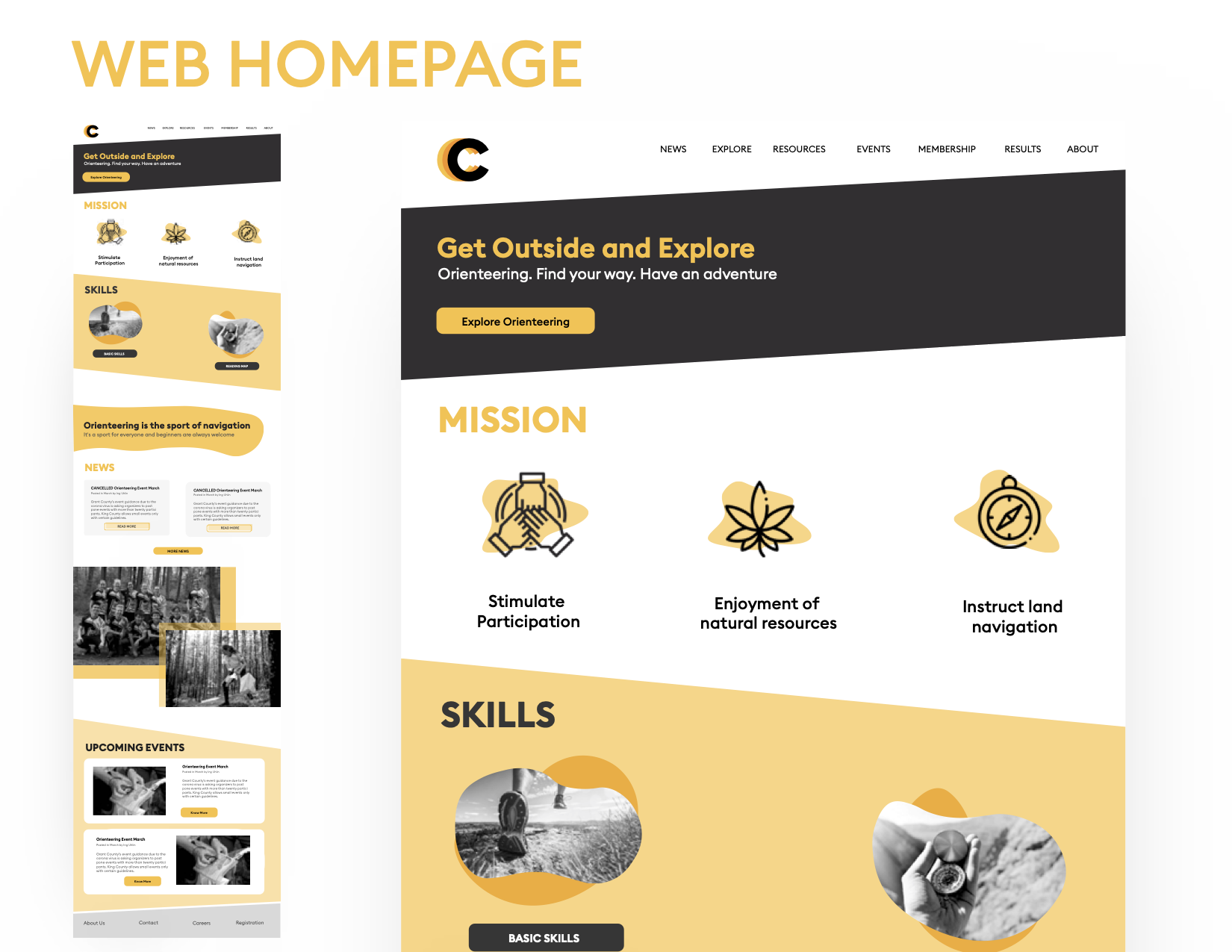 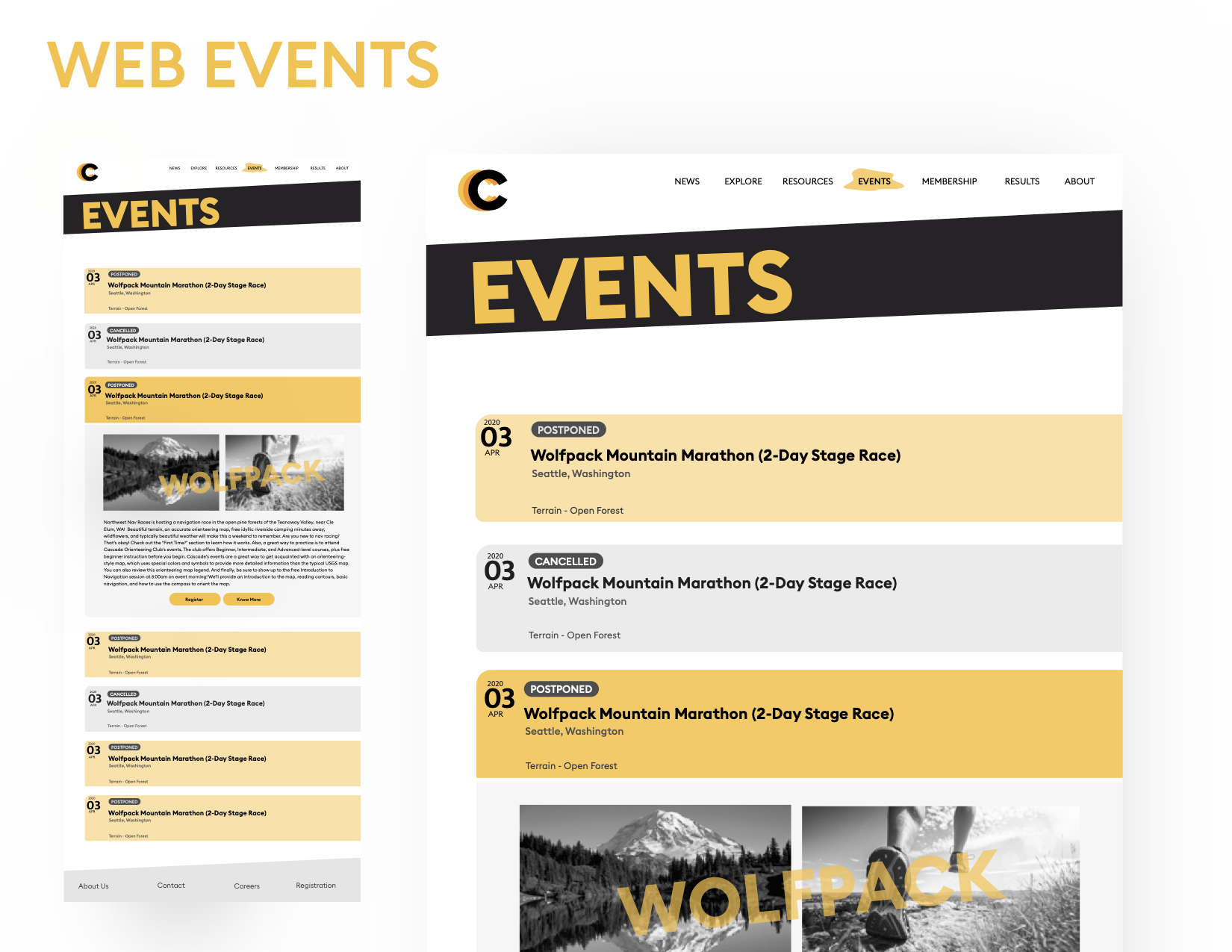 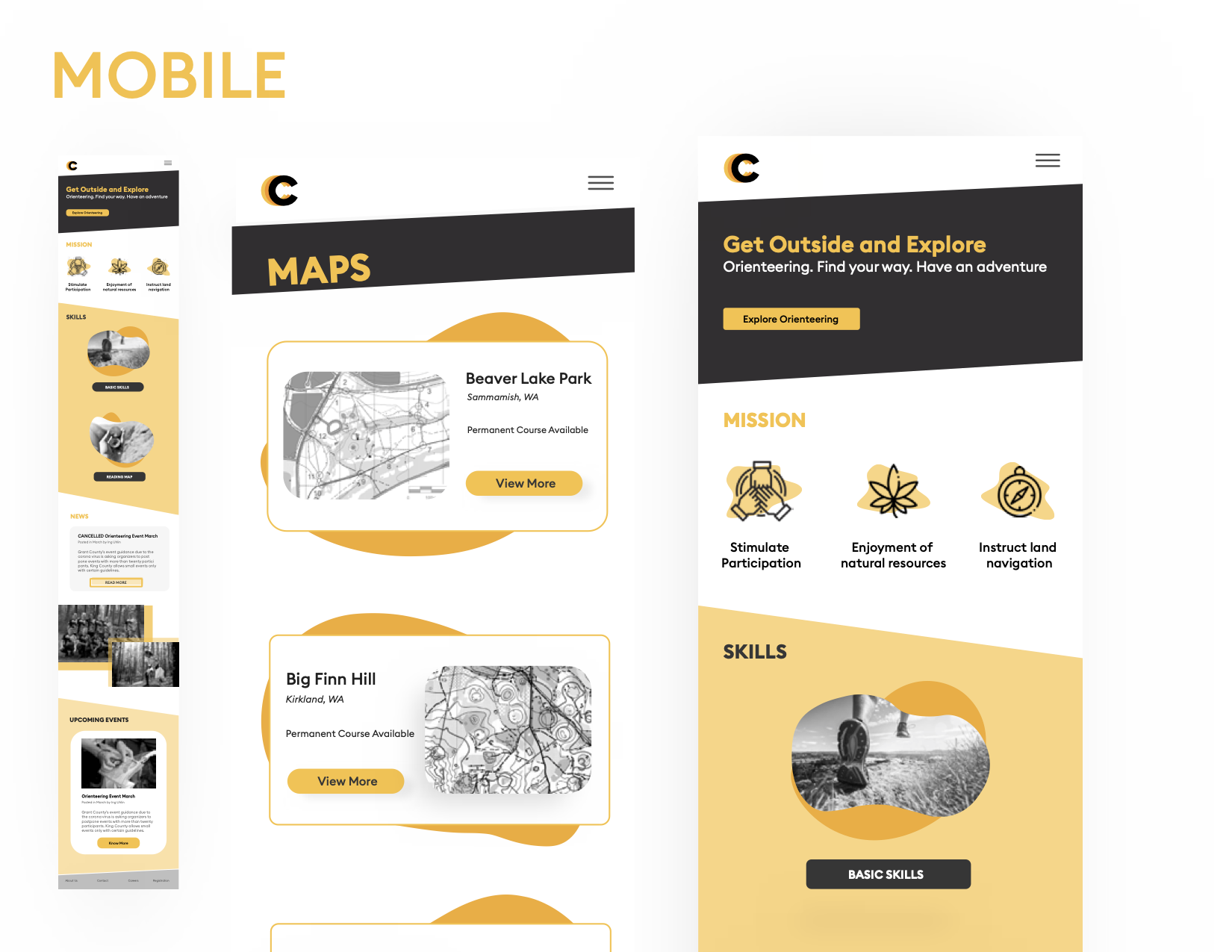 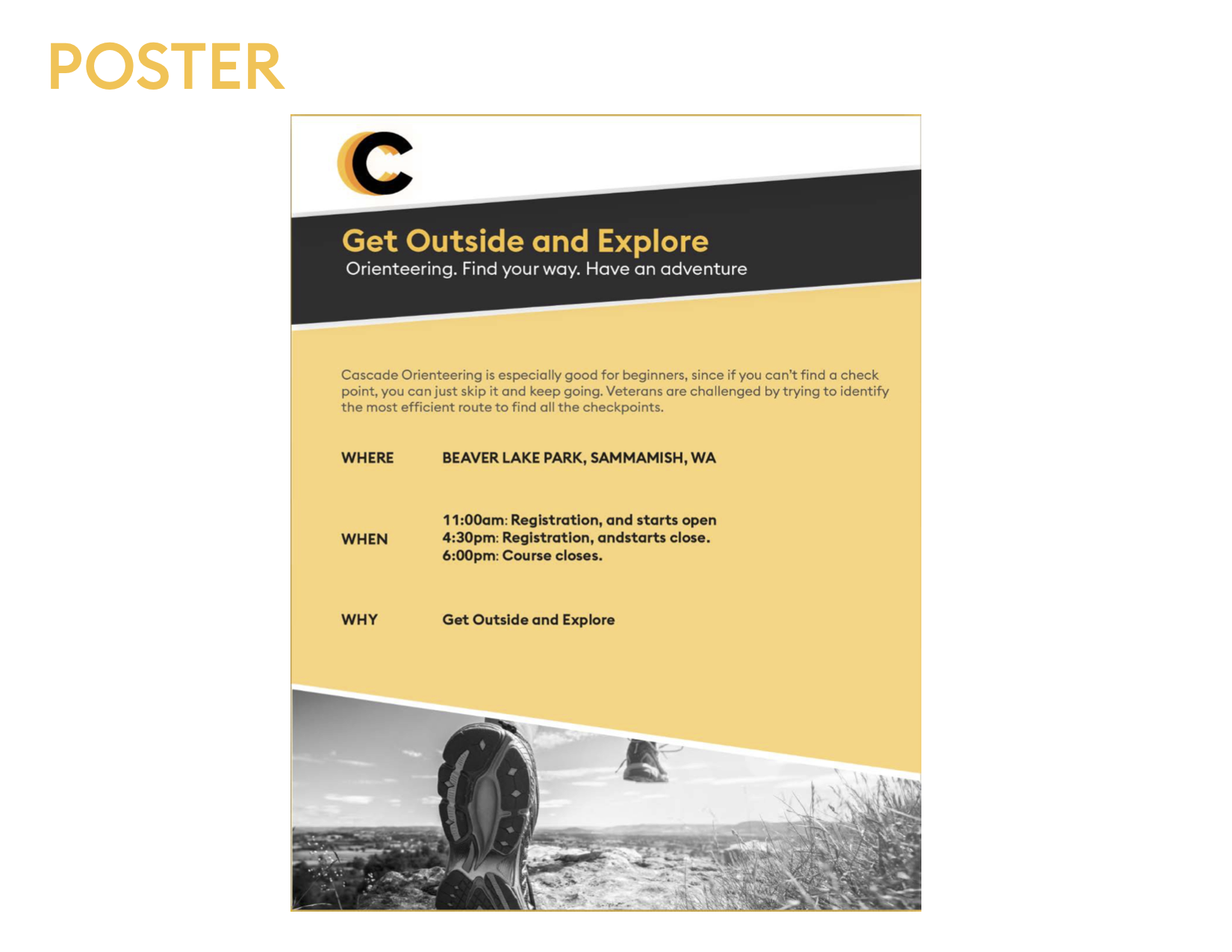